We’ve lived in the London suburbs all of our lives and so don’t often go into town because we can any time we like, right? Then we don’t.

So, it’s the holidays, and we have a young man from France staying with us. I am very aware that 15 year old boys usually like nothing better than to spend the whole day playing video games and mooching around and I don’t like to chivvy too much, but life’s too short for mooching and such a shame to come to London and not see any of it. But Antoine has already been to London 5 times and taken in all the sights, so we needed something different and, preferably, fun. Which is why I was so pleased to spot this smallcarbigcity tour on Keynoir a few months ago. I just called the company to book the tour and they were friendly and fun.

The kidz were picked up at St. James’s Park tube station by the lovely Alastair in a British Racing Green Mark 1mini, for a 90 minute Italian Job tour. We’d made sure they’d seen The Italian Job the night before so the three of them were unfazed when presented with boiled suits and flat caps to wear on the trip to get into character. And off they went. 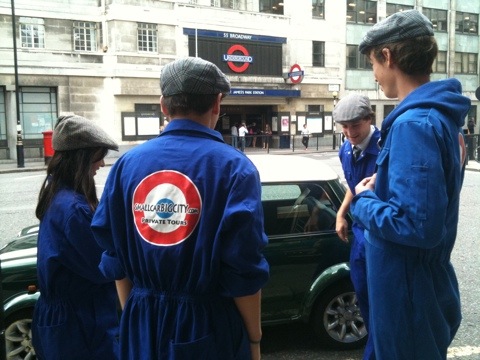 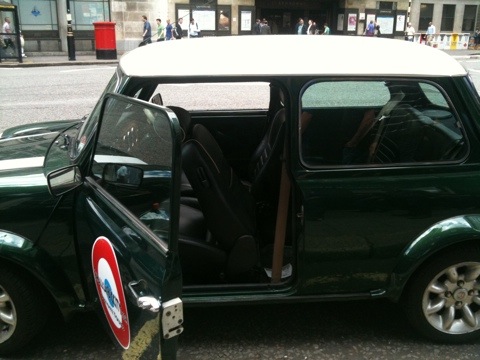 And an hour and a half later I met them in Piccadilly. I had, of course, taken advantage of the opportunity to purchase some UK-appropriate presents in Fortnum’s in the meantime. They were grinning as they alighted from the car. They’d been on a whistle stop tour of Trafalgar Square, Parliament Square, Covent Garden, Embankment, but didn’t cross the river, of course. Alastair provided them with a quirky and interesting commentary including little-known facts about French cannons and the Iron Duke’s nose on Admiralty Arch.

This Italian Job tour costs from £119 for a 90 minute tour for three passengers.

Have a look at http://www.smallcarbigcity.com/tours

Please click on the logo to sponsor me or donate to Moonwalk 2013 in aid of Walk the Walk, which makes grants to charities that fight breast cancer. You're all marvellous! x